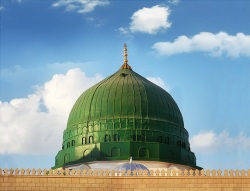 Not only to stand up is a sign of respect, but there are many other ways of respecting someone or something Like it is in

And seek help from patience and Salaah

The question may arise that why did Allah mentioned Salaah after patience? Then the answer to this question has been given by Allama Jalalud-deen Suyuti alaihi Rahmah, in his Tafsir-e-Jalalain:

To mention Salaah independently shows its status and its respect. This means that because Allah wanted to show the respect of Salaah, he mentioned it separately.

For example, if there is a wedding and someone orders his relatives Give invitation to every one who are present in the mosque and also dont forget to give the invitation to Mufti sahib, even though mufti sahib is included by saying every one but to mention him separately is a sign to illustrate his respect.

It is also in second chapter of the holy Quraan:

Underneath this verse, Allama Suyuti has written: This verse was revealed because of some companions like Hazrat Abdullah bin Salaam when they were respecting the Saturdays.

This was due to the fact that Hazrat Abdullah bin Salaam and some of his friends were Jews before accepting Islam, therefore they still had that habit of not hunting animals on Saturdays as they were respecting this day and believed it as a holy day. Due to this reason the verse was revealed.

From this, we get to know that not killing something on a particular day is also regarded as a sign of respect.

When the magicians came to Hazrat Musa Alaihi Salaam, they asked:

You may drop your stick or we will drop ours

The asking of the magicians was classed as respect, and due to this respect, they were gifted with Imaan, as it is mentioned in Tafsir-e-Khazin and Tafsir-e-Jamal:

Allah Taala bestowed them many blessing and bounties. And the greatest gift he gave them was Imaan

Just by asking Hazrat Musa alaihi Salaam, which was a sign of respect, they were gifted with Imaan and were saved from the fire of hell.

From this verse we get to know two things. Firstly that the request and the asking of the magicians was a mark of respect. Secondly, the Imaan does not go away by respecting the prophet, but if he was a non-believer then he is bestowed with Imaan. And if he is a believer then his Imaan is enlightened more!

(Next point) The scholars have called it a good act to decorate the mosques as it shows the value and the respect of the particular mosques. They have also said:

We learn that to decorate and to illuminate the mosques is not a bad act but it is a noble act as it shows the degree and respect of the mosques. In addition, to produce perfume-smelling fumes around the deceased persons bathing table reveal the respect of the deceased. To respect someone or something other than Allah is not a sin but one can gain many rewards from it.

From the holy Quraan and the books written by our great Ulema-e-Kiraam it is evident that respect is not just to stand up for someone, but there are numerous ways in respecting someone.

For that reason if someone comes to the airport, we go to meet him and place a flowery necklace(Haar) and place flags, all this is to show respect for the person who arrived.

In the similar way to make delicious food, to clean the house for the relatives is an act of respect. To give space for the coming person, up to the extent that to refrain from smoking in front of a person is his respect, (because by doing these acts reveals the status of the person).

The people who are against respect and honour do many things to respect someone other than Allah, but no person has written a verdict (Fatwa) against them regarding the deeds as Kufr. However when a true Muslim tries his up most in respecting the Prophet (Sallallahu Alaihi wa Sallam), then those who have fire in their hearts show their anger to the Muslims, by giving a verdict of infidel. May Allah give them all the good understanding. Ameen!

« Miracles that took place at the time of Prophet sallallahu ta’ala’alayhi wa sallam’s Blessed Birth
The Holy Quraan and the Respect of the Prophet Sallalaho alaihi wasallam »
%d bloggers like this: