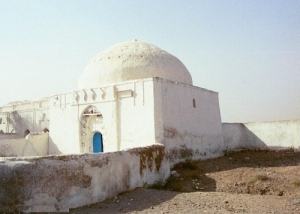 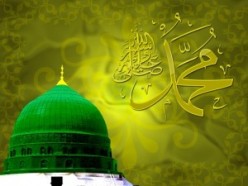 Syedah Aamena Radi Allahu anha stated that as soon as the labour pains of childbirth started, an angel came and ask her to drink from a cup in his hand. This drink was whiter than milk and sweeter than honey. As soon as she drank this heavenly drink her pain disappeared and all fear left her.

Syedah Aamena Radi Allahu anha then saw the gates of Heaven open. The Angels came for the adoration of the new babe. Three Angels went towards the Kaa’ba. One Angel stayed over the Kaa’ba, one went to the East and other went towards the West. A light then Spread out lighting up the Universe. In this miraculous light, Syedah Aamena Radi Allahu anha stated , She could see distinctly the palaces of Palestine and Syria.

Then Four unkown ladies appeared miraculously before Aamena Radi Allahu anha to attend to the childbirth.

The First, who was very tall, said, she was Eve Radi Allahu anha, the mother of mankind.

The Second was Sarah Radi Allahu anha, the mother of the Prophet Issac Alaih salaam, and the grandmother of Jacob Alaih salaam, whose children were the Israelites, to pave the way for the forgiveness of the Jews, if they followed this child Muhammad Salla Allahu ta’ala’alayhi wa sallam.

The Third was Princess Hagar of Egypt, the mother of Prophet Ishmael Alaih salaam. She came with Otto ( a sweet – smelling essence ) from Heaven, to express her love for this great grand-child from the descendants which fulfilled Allah’s ( Azawajal ) promise to her husband Prophet Abraham Alaih salaam, ” the world would be blessed through thy seed.”

The Fourth was Queen Asiya Radi Allahu anha, daughter of Mazahim. She was the wife of the Pharaoh of the time of Moses. She was that queen of Egypt who brought up Moses from a little child when he was found floating in the basket on the river Nile. She was the first person in the Pharaoh’s court who belived in Allah ( Azawajal ) upon seeing how small miraculous snake made by the staff of Moses ate up the bigger snakes of the Egyptian magicians. Whereupon the enraged Pharaoh tortured her severely, but in spite of this she refused to give up her faith.

In the hands of these four great nurses was Muhammad Salla allahu ta’ala’alayhi wa sallam born with his foreskin already circumcised miraculously, with his navel cord already separated miracculously pure and clean without any kind of  blood or filth on it. END_OF_DOCUMENT_TOKEN_TO_BE_REPLACED

END_OF_DOCUMENT_TOKEN_TO_BE_REPLACED

Pride is the offspring of self-conceit, and this is the very negation of faith. Pride and faith cannot go together. Imaan inculcates in man the spirit of humility and submission to Truth. Pride is the expression of vanity, which is one of the greatest hurdles in the path of truth. The self-conceited man accepts nothing, which does not satisfy his vanity, and, therefore, he cannot be a true believer. He is a worshipper of his “own self”.

The Holy Quraan has mentioned at numerous places that it is vanity and self-conceit which stand in the way of man in accepting the Truth, e.g. it was out of pride that Iblees refused to obey the command of Almighty Allah. (2:34)

The Holy Quraan says: Is it then that whenever there came to you a Messenger (sallal laahu alaihi wasallam) with what your souls desired not, you were arrogant? And some of you belied and some of you slew. (2:87)

Almighty Allah observes: Those who belie Our signs and turn away from them in arrogance, the doors of Heaven will not be opened for them, nor will they enter the Garden, until the camel pass through the eye of the needle. And thus do We reward the guilty. (7: 40)

The vain and self-conceited person not only belies the truth, but they even look down upon the people who have ties of human brotherhood with them. They consider themselves to be superior beings marked off from the rest of mankind. The Holy Quraan says: And turn not thy face away from people in contempt, not go about in the land exultingly. Surely Allah loves not any self-conceited boaster.(31: 18)

Sayyiduna Rasoolullah (sallal laahu alaihi wasallam) said: There will be three persons whom Allah will not address on the Day of Judgment nor will He purify them, nor will He look at them; they will be under dreadful punishment. They are: (1) An aged adulterer, (2) A liar King and (3) An indigent proud person. (Muslim)

“Allah the Almighty says that Pride and Glory are My attributes; whosoever will try to share with Me any of these attributes, I will send him to Hell”. (Muslim)

The Beloved Rasool (sallal laahu alaihi wasallam) said: On the Day of Judgment, men of false pride will be raised in the bodies of ants with their human faces. They will be fully covered with ignominy and disgrace and will be dragged towards the Hell prison called Bolis. They will be punished with the fire of fires and will be asked to drink the sweat of the inmates of Hell called the brew of insanity.(Tirmidi)

The Beloved Nabi of Allah (sallal laahu alaihi wasallam) said: He who acts in humility for the sake of Allah, Allah raises his status; he may be small to himself but very big in the eyes of people. And the person who boasts in false pride, Allah degrades him; he may be big to himself but very low in the eyes of people; he is, to the people, lower than dog and swine. (Bay’haqi)

Sayyiduna Al-Aswad (radi Allahu anhu) reported: I asked Sayyidah Ayesha (radi Allahu anha) what the Prophet (sallal laahu alaihi wasallam) used to do at home? She said: He used to keep himself busy serving his family and when it was time for the prayers, he would get up for prayers. (Bukhari)

The Holy Prophet (sallal laahu alaihi wasallam) said: There is no greater charity than a man’s spending his money for the members of his own family. He further said: Gift and charity to the poor kinsmen bring double rewards than that to strangers. And he said: He who joins (blood-tie) is not a perfect man, but it is he who joins blood-tie when it has been torn asunder. The Holy Prophet (sallal laahu alaihi wasallam) said: No mercy descends upon the person among whom there is one who disregards the ties of blood.

Sayyiduna Rasoolullah (sallal laahu alaihi wasallam) had a great love and affection for his own children. Whenever he took a journey or returned from it, he used to see his beloved daughter Sayyidah Fatima (radi Allahu anha). Whenever she came to him, he used to stand up and make her sit by his side and kiss her on forehead.

Sayyiduna Anas (radi Allahu anhu) reported that the Holy Prophet of Islam (sallal laahu alaihi wasallam) used to go everyday on foot to Awali, a place 3 to 4 miles off from the town of Madina to see his son Sayyiduna Ibra’heem (alaihis salaam) who was being brought up there at that time. He used to take him in his lap and kiss him.

Sayyiduna Rasoolullah (sallal laahu alaihi wasallam) was the most ideal husband and pleasant companion. His treatment with his wives is the most exemplary. As a husband of an old wife, as a husband of a young wife, as a husband of a widowed wife, as a husband of many wives, as a husband of a wife living in foreign land or in foreign faith, the Holy Prophet (sallal laahu alaihi wasallam) was a true ideal and a model for mankind. In the whole period of his married life, he did neither administer a single rebuke to his wives, nor give a beating even with a slight a thing as a tooth-stick. His treatment with them was the most cordial. He regarded them as co-partners in happiness as well as in distress, but never the idea crossed the threshold of his mind that they were for his sexual luxury. He used to say: The best of the commodities of the world is a virtuous wife. And he said: The best of you are those who are the best of you to their wives. He further said: Prayer, perfume and wife have been made a solace to my eyes. Everything with which a man plays is unlawful except his sporting with his wife.

1. Verily, Allah and His angels send mercy upon those who eat Suhoor. (Tabraani)
2. Eat Suhoor because in Suhoor lies Barakah. (Mishkaat)

1. Ther fishes in the sea seek forgiveness for those fasting until they break their fast. Allah decorates His Jannah every day and then says, “The time is near when My pious servants shall cast aside the great trials and come to me.” (Ahmad)
2. During each day and night of Ramadaan, Allah sets free great number of souls from Hell. And for every Muslim, during each day and night, at least one Du�a is certainly accepted. (Bazzaaz)

1. Sawm (Fasting) is a shield, as long as he (the fasting person) does not tear it up. (Nisaai)
Note: Fasting is a protection from Shaytaan or from Allah’s punishment in the Hereafter. One who indulges in sins whilst fasting such as lies, backbiting, etc., they become the cause of the fast becoming wasted.
2. All good deeds are for the one who renders them, but Fasting is exclusively for me (Allah). (Bukhari)
3. Fasting is a shield and a powerful fortress. (Ahmad, Bayhaqi)
4. I swear by that Being in Whose possession is the life of Muhammad! The odour of the mouth of a fasting person is sweeter to Allah than the fragrance of musk. (Bukhari)
5. Fasting is exclusively for Allah(Azzawajal), the reward of it (being limitless) no one knows besides Allah. (Tabraani)