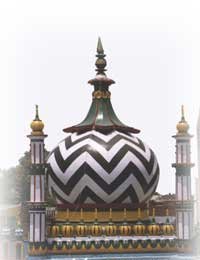 Allah In the name of the Most Affectionate, the Merciful.

“Lo! We have sent you (O Muhammad صلى الله عليه وسلم) as witness and a bearer of good tidings and a Warner, that mankind may believe in Allah and His Messenger, and may honor him,and may revere him and may glorify Him at early dawn and at the “close of day”
(SURAH XLVIII: 8-9)

Oh Muslims! Note that your ALLAH Almighty says hear clearly that there are three aims of sending to you the faith of Islam and revealing to the prophet the Holy Quran.

First, that people should believe in Allah and His Prophet.

Second, that people should respect the Prophet.

Oh Muslims! Note the beautiful order in which these three important things have been mentioned. In the beginning Allah has mentioned the belief in Himself and in the end He has mentioned His worship and between these two He has mentioned His beloved Prophet. The reason is that belief without respect of Prophet صلى الله عليه وسلم is no use. There are many Christians who have written Prophet’s greatness and refuted the allegations of the non-believers or given lectures, but because they have no belief in Allah, their writings and lectures are only an appearance but not reality. Had they a real attachment to the Prophet in their hearts they would have Started believing in Allah Almighty. Unless one holds the Prophet in the highest degree of affection, there is absolutely no reward for a life-time of loyalty to Allah. There are many yogis and others who have renounced all joys and spent their lives in praying to all. The are many amongst them who assert that there is no deity but Allah ( LA ILAHA IL LALLAH ) and they utter these words again and again but since they do not respect the Prophet their worship is not acceptable to Allah. Allah Almighty has said about such people:

“And We shall turn unto the work they did and make it scattered motes”
(SURAH XXV. 23)

About such people He says:

May Allah protect us! Oh Muslim, is the respect for the Prophet a basic requirement of belief and salvation or isn’t it ? Say that it is, and definitely, it is.

“Say (O Prophet): If your fathers, and your sons, and your brothers, and your wives, and your tribe, and the wealth you have acquired, and merchandise for which you fear that there will be no sale, and dwellings you desire are dearer to you than Allah and His Messenger and striving in His way: then wait till Allah brings His command to pass. Allah does not guide the wrong-doing folk”.
(SUHAH IX: 24:)

From this verse we come to know that any person, who holds any relative or person or wealth or anything dearer than Allah and His Prophet, stands rejected in the eyes of Allah. There is no possibility of Allah being pleased with him, and he must wait for Allah’s punishment May Allah protect us!

“Nobody amongst you will become a Muslim unless I am dearer to him than his parents, children and all other persons”.

This Hadith is from Sahih Bukhari and Sahih Muslim and its narrator is Anas bin Maalik Ansari (may Allah be pleased with him). It has been le crystal clear that any person who holds somebody dearer than the Prophet is not a Muslim at all. Oh Muslims, Say whether the highest degree of respect for ” Prophet is stipulated as the fundamental requirement of faith and salvation or isn’t it? Say it is and positively, it is. So, all the Muslims who recite the Kalima will quite willingly accept that the honor and greatness of the Prophet is on the highest point in our hearts. I emphasise that we love our Prophet more than our parents our children and the entire world. Brothers, I pray to Allah that He may allow attitude of ours to continue.

« THE PROPHET (Salla Allahu ta’ala’alayhi wa sallam) has the power of giving benefit and loss
Visiting the Blessed Mausoleum of the Beloved Messenger of Allah SallAllaho Alaihi wa Sallam »
%d bloggers like this: